Bollywood Society » The CBFC has given Jayeshbhai Jordaar, a film starring Ranveer Singh, a U/A certificate with no edits
Bollywood

The CBFC has given Jayeshbhai Jordaar, a film starring Ranveer Singh, a U/A certificate with no edits 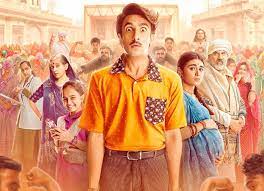 Jayeshbhai Jordaar, Ranveer Singh’s forthcoming comedy-drama, is among the year’s most anticipated movies. Shalini Pandey, Boman Irani, and Ratna Pathak Shah play significant parts in the film. The trailer was published a few days ago, as well as it has been well welcomed by the public. Although fans wait for the movie’s premiere, the Central Board of Film Certification has given this a U/A certificate with zero edits.

Bollywood Hungama reports that “The film is based on the burning topic of female infanticide and the lead actor Ranveer Singh is seen threatening to castrate himself in a scene. However, director Divyang Thakkar has treated the whole film in a non-objectionable manner.”

The unpleasant issues of female infanticide were also depicted in a ‘light-hearted manner,’ according to the report, and so as a consequence, the CBFC did not delete any visual or language from the movie and granted it a clean U/A without any cuts.

Jayeshbhai Jordaar is among the smallest Bollywood movies in a long time, with a duration of 124 minutes, or 2 hours and 4 minutes, according to the certificate. Inside the movie, Ranveer plays Jayeshbhai Patel, a Gujarati man married to Mudra Patel (played by Shalini), who battles for the life of his pregnant daughter.

Divyang Thakkar wrote and directed the movie, which is produced by Yash Raj Films’ Aditya Chopra as well as Maneesh Sharma. The film will be released in theatres on May 13, 2022.

In a recent picture, Kareena Kapoor Khan shows off her ‘lazy lamhe’; have a look

Mira Rajput wears a green jumpsuit when she wraps up her vacation to Dubai; she says that she wants her “bed and babies”