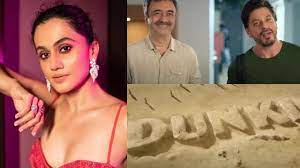 When Shah Rukh Khan revealed his new film Dunki alongside Rajkumar Hirani a few days ago, his fans were ecstatic. Taapsee Pannu, who has shown her flexibility in previous films, will play the leading woman opposite SRK. This will be her first collaboration with King Khan, and we’re sure her enthusiasm levels are sky-high. The actress recently claimed that her family is ecstatic to see her again in a Hirani movie, especially one starring Khan.

Taapsee Pannu expresses her delight at the prospect of working on Raju Hirani’s passion project Dunki. “Each time I went for the meeting with Raju sir, or reading or any conversation I had with him on phone, every time I came back home, she asked me, ‘Tu abhi bhi hai na film mein?’ My parents, however, didn’t give me any noticeable reaction, also maybe they’ve understood that till the time it happens, let’s not celebrate too early.”

It was in 2020 when the rumour was first flown in the air that Hirani is considering Taapsee Pannu for his next and she considered it to be “yet another rumour, which will make you happy for a while, but nothing’s going to happen”. But, a call from Hirani changed everything for her. “He said, ‘Now that it’s already out, let me officially call you and say that I’m doing this film, and I’d love you to be a part of it.’”

The actress continued “Raju sir was so excited about the whole project and the way it was coming together that he, on the first call itself, started narrating to me the first two scenes.” Taapsee says she worked on the project for about ten days. Hirani produced and directed Dunki, which Gauri Khan co-produced as well as starred SRK and Taapsee Pannu in crucial parts.

Shilpa Shetty looks stunning as she takes a bike ride on the sets of Sukhee, as seen in leaked photos