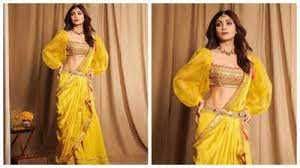 Shilpa Shetty is going all out to promote her forthcoming film ‘Nikamma,’ which also stars Abhimanyu Dassani and Shirley Setia. Nikamma is an action love film directed by Sabbir Khan, who also directed ‘Heropanti.’ It stars Sunil Grover and Samir Soni. Shabbir Khan Films and Sony Pictures India are collaborating on the project. Filming began in July 2019 and will conclude in November 2020. Nikamma, on the other hand, will be released in theatres on June 17, 2022.

However, the actress was recently spotted in Mumbai promoting the flick. She wore a lemon-yellow crop top with a multi-colored split skirt. The actress recently released a teaser trailer for the film, in which she appears as Avni, a sparkling superwoman. Shilpa was seen dressed as a superwoman and wielding a sword, lightning running through her!

In terms of the trailer, it begins with the introduction of Abhimanyu’s character Adi, who is nothing more than a ‘nikamma.’ He meets a woman, Shirley Setia, who falls in love with him right away. The song ‘Kyaa Dil Ne Kahaa’ has also been recreated for the film. “Nikamma kiya iss dil ne” It immediately evokes memories The teaser, on the other hand, depicts Shilpa’s character Avni descending to Earth to repair Adi and modify his way of life. She makes him do all of the housework. When a hitman attacks the superhero Avni, though, nikamma changes into a hero to defend her.

Sukhee will include the Hungama 2 actress in addition to Nikamma. Sonal Joshi will helm the film, which will be produced by Bhushan Kumar, Krishan Kumar, Vikram Malhotra, and Shikhaa Sharma. She’s also a part of Rohit Shetty’s action web series Indian Police Force, in which Sidharth Malhotra plays a pivotal role.

In these BTS photos from an ad session, Kareena Kapoor Khan looks stunning in a white shirt and slays

Even as an industry insider, Adhyayan Suman claims that nepotism did not aid him