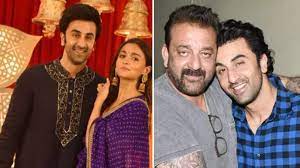 With Ranbir Kapoor and Alia Bhatt’s wedding just around the corner, their wedding is the only thing on everyone’s mind right now. As you can see, the planning is already on, and we’ve already confirmed that their wedding will take place on April 15. Because no official confirmation has yet been received in this respect, everyone’s enthusiasm and interest levels are rising. Sanjay Dutt was recently promoting his flick KGF: Chapter 2. We all know he has a close relationship with the Brahmastra star. As a result, he was questioned about Ranbir and Alia’s wedding.

Sanjay Dutt was asked at a media interview if he had any marital advise for Ranbir Kapoor. Sanju was the first to question, “Is Ranbir actually getting married?” He also stated that if he is indeed getting married, he is ecstatic for him. He further said that Alia Bhatt was practically born and raised in his presence. Sanjay continued, “Marriage is a commitment they are making to each other. And they have to stick by that, hold each other’s hands and move ahead in happiness, peace and glory. Make kids soon Ranbir, and stay happy!”

Sanjay Dutt was asked whether he had any marital advise for Ranbir Kapoor. According to the actor, it is a matter of compromise on both sides. Rocky roads will appear and disappear, but someone must bend. “I would only advise them to assess the situation and be on the same page as for who needs to bend in the given circumstance at that time. With every curve in the road, they have to remember that the commitment they made to each other is very important and that is the key to keep moving ahead.”

Meanwhile, word on the street is that Ranbir Kapoor and Alia Bhatt will give the wedding a contemporary touch. They will take vows in front of the pheras.

Vicky Kaushal plays cricket with his squad at midnight; don’t miss his shot towards the finish