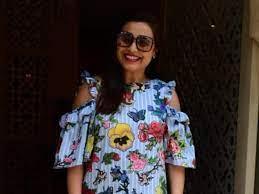 Rani Mukerji is regarded as one of the most popular actresses of her generation. She still has a large fan base, and people still want to see her on the big screen. When the actress comes out of her house, paparazzi never miss an opportunity to photograph her, and today was one of those days when Rani looked simply stunning. Rani was seen outside a restaurant, and it appears like she went out for lunch.

Rani Mukerji may be seen in the photos wearing a blue short dress. There were numerous prints on the garment. The outfit has it all, from flowers to butterflies to birds. She wore huge rimmed sunglasses and kept her hair open. She was holding a bag that was red, blue, and yellow in colour. Her gown had lovely sleeves. She completed her look with a white flip flop and a bright smile for the cameras.

However, Rani Mukerji discussed her path from not wanting to be an actress to how actor Kamal Haasan helped her through it in a recent interview with India Today. The actress confessed that her mother had achieved her aim before she did, but Rani had never considered herself a heroine.

Mr. Kamal Haasan also reminded Rani Mukerji that she couldn’t evaluate her achievement by the height of her physical standing, but rather with the height of how much she can grow practically.

Mrs. Chatterjee vs Norway will be her first acting role.