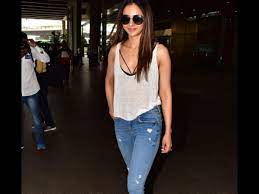 The paparazzi and B’Town celebrities had a busy day on Monday, as several of them were photographed in Mumbai. Rakul Preet Singh was also sighted at the airport only a few seconds ago. After releasing the second teaser for her next film Runway 34, in which Ajay Devgn and Amitabh Bachchan feature, the actress went to her dream city of Mumbai.

Rakul Preet Singh dressed casually for her flight tonight. The Attack actress wore a bright pink crop top with torn high-waisted, wide-legged denim jeans. Her hair was pulled back into a ponytail with a central parting, making it seem sleek and shining. Rakul kept her make-up simple and natural. She completed her ensemble with a white muth mask, which she removed when she posed for photographs with the media.

Rakul Preet Singh, on the other hand, has been working nonstop. She recently starred with Jacqueline Fernandez and Ratna Pathak Shah in John Abraham’s Attack. She’s now working on a few fascinating projects. She was in New Delhi today for the second trailer premiere of Runway 34. The film is slated for a theatrical release on April 29th, 2022. She also has Doctor G, starring Ayushmann Khurrana and Shefali Shah, and Thank God, starring Ajay Devgn and Sidharth Malhotra.

Also Read: As they come in elegance for Runway 34 promotions, Ajay Devgn and Rakul Preet Singh steal the show

Singham 3 is in the works: Ajay Devgn reveals that filming would begin before the end of the year