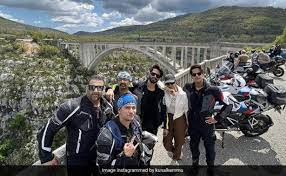 Ishaan Khatter is now in Europe with his boy gang, which includes Shahid Kapoor, Kunal Kemmu, as well as others. They’re on a motorcycle journey and enjoying the time of their life. Shahid, Ishaan Khatter, and Kunal’s fans have been treated to a visual feast as the actors have shared photos from their vacation on social media. The trio has already been sharing bits and pieces of their exciting adventures on social media. Wednesday was the seventh day of their fascinating journey. On Instagram, Ishaan showed off his incredible bike talents as well as a picture dump with his friends.

We could see Ishaan Khatter, Kunal, as well as film writer Raja Krishna Menon riding away on their motorcycles while a beautiful panorama opened behind them in the video. It must have been an airy sensation for us? Ishaan Khatter wrote beside the video, “Day 7”. He then uploaded a photo dump of his exciting trip, in which he snapped peeks of all the fun he and his crew are having. Naturally, the posts went viral in minutes as followers expressed their delight.

In the meantime, on the professional front, Ishaan Khatter is going to play Brigadier Balram Singh Mehta in the forthcoming film Pippa. It is based on the true story of Brigadier Balram Singh Mehta, a war veteran who participated in the Indo-Pakistan war of 1971 alongside his brothers. Mrunal Thakur will play Khatter’s younger sister, whereas Priyanshu Painyuli will portray his older brother. In addition, he will appear in Phone Bhoot, with Katrina Kaif and Siddhant Chaturvedi.

Also Read: In fresh photos from their trip, Shahid Kapoor and Ishaan Khatter have ‘helmet hair’