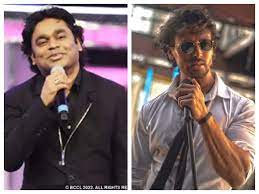 Tiger Shroff has a lot on his plate these days. He is, after all, promoting his new film Heropanti 2. Tara Sutaria and Nawazuddin Siddiqui will also appear in the film, which is the sequel to his debut. Tiger created news ahead of the film’s premiere when he debuted the Heropanti 2 film’s song Miss Hairan. The song is sung by Tiger, and it is the actor’s debut collaboration with music legend AR Rahman. Rahman recently spoke out about the partnership and gushed over the actor.

Tiger’s vocal abilities have left the legendary musician speechless. He explained, “The third song has a new singer introducing Tiger Shroff and I hope you like his voice. I was pretty surprised with his ability to emote and give a drive to this song. Enjoy Miss Hairan”.

It’s worth noting that this isn’t Tiger’s first song. With songs like Casanova, Vande Mataram, and the Punjabi-English number Poori Gal Baat, he had previously launched his singles in the past. This is Tiger’s first time singing for a Bollywood film.

In the meanwhile, Heropanti 2 will be his second collaboration with Tara, following Student of The Year 2, and he will reprise his role as Babloo from the previous film. The Ahmed Khan-directed film is set to release on April 29 and will compete with Ajay Devgn, Amitabh Bachchan, and Rakul Preet Singh’s Runway 34 at the box office.

Salman Khan’s second innings in films, according to Bobby Deol: “Race 3 marked the beginning of a lot of things”