Bollywood Society » ‘Looking at you…looking at me,’ Kareena Kapoor Khan says as she stares intently at the camera
Bollywood 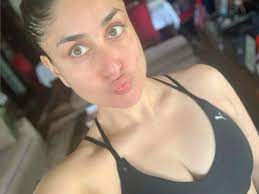 Kareena Kapoor Khan is a Bollywood starlet who needs no introduction. The brilliant Bollywood actress is a social media queen who enjoys updating her followers on her personal life. The stunning diva is also known for sharing dazzling photos of herself with her admirers. Bebo came to Instagram on Saturday to make all of her fans drool with yet another stunning photo from the United Nations Young Changemakers Conclave. Kareena looked stunning in a stunning black gown.

Kareena Kapoor Khan wore a basic black gown with a criss-cross back and a fashionable neckline. Bebo wore her hair down and accessorised with golden earrings and black shoes. Soon after, celebs such as Sonam Kapoor Ahuja, Karisma Kapoor, and Neha Dhupia flocked to the comment section to express their gratitude. Kareena chose to surprise her admirers with another stunning photo in the same attire. The ‘Angrezi Medium’ actress posed for the photo with a serious expression on her face. “Looking at you…looking at me,” she wrote when she shared it.

Meanwhile, Kareena Kapoor Khan will next be seen in Laal Singh Chaddha, a film co-starring Aamir Khan. The film is the official Bollywood version of the Hollywood classic Forrest Gump, directed by Advait Chandan. Intriguingly, the actress shot the movie while pregnant with her younger son Jeh, who will be born in 2020. On August 11, 2022, the forthcoming film will be released in theatres. She’s also collaborating with Jaideep Ahlawat and Vijay Varma on Sujoy Ghosh’s flick. Her digital debut on Netflix will be with this movie.