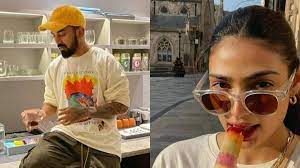 KL Rahul underwent surgery in Germany, and now he and Athiya Shetty have returned.

Athiya Shetty, the adorable daughter of actor Suniel Shetty, has a huge online fan base. She frequently posts glitzy outfits to Instagram, leaving her loved ones and followers in amazement. She has been romantically involved with cricketer KL Rahul for a long time. They often like and remark on one another’s Instagram postings. On her Instagram account, Athiya recently posted a picture of a recovering KL Rahul.

When Suniel Shetty was questioned about his daughter’s engagement to KL Rahul, he said that he loved KL a lot and that the couple should decide whether or not to get married.

KL Rahul and Athiya Shetty were seen arriving back from Germany, where he had surgery last week, at the Mumbai airport this evening. Ladylove of KL Rahul was next to him like a pillar. In her black shrug, black t-shirt, and white pants, Athiya kept things casual. As they made their way to their car in the parking lot, KL Rahul, who was walking behind Athiya, looked really fashionable in his blue jacket over a white t-shirt and brown slacks.

In Germany, KL Rahul underwent hernia surgery. The excessive usage of the lower abdominal muscles results in sports hernia. KL Rahul updated his fans, supporters, and followers on Instagram about his condition. The vice-captain and opener for India wrote, “Hello everyone. It’s been a tough couple of weeks but the surgery was successful. I’m healing and recovering well. My road to recovery has begun. Thank you for your messages and prayers. See you soon”

KL Rahul, meanwhile, is usually spotted like Athiya’s posts and leaving comments with hearts. The wedding of Athiya and KL Rahul has already generated a lot of discussion. Suniel Shetty took advantage of the opportunity and stated that he wished for his son Ahaan Shetty to marry soon as well. He said that his kids are quite mature and capable of making judgments about their own relationships.

Also Read: Suniel Shetty discusses the wedding of KL Rahul and Athiya Shetty: I adore the boy, but it is up to them to decide.

Ranveer Singh is prepared for the wild as he swallows an insect in the latest commercial for “Ranveer Vs. Wild With Bear Grylls.”