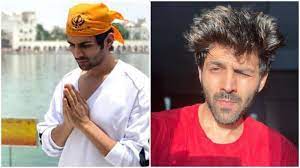 Kartik Aaryan is among India’s most well-known celebrities. Pyaar Ka Punchnama, Dhamaka, Sonu Ke Titu Ki Sweety, Love Aaj Kal, Pati Patni Aur Woh, and more films have showcased his talent. And now, he’s getting ready to release his much-anticipated Bhool Bhulaiyaa 2 on the big screen. Kartik is a Gwalior native who moved to Mumbai to pursue his dream of being an actor. Kartik paved his way to Bollywood with his skills and hard effort.

During a recent interview with Film Companion, he discussed his early struggles and recounted how people encouraged him to return to Gwalior. He also revealed his “mantra” for overcoming his difficulties. When asked what kept him going, Kartik replied, “It makes me feel sad sometimes when you get to know that it is related to your success and is not to you…I have learned it now and you get scared also that if you aren’t successful, these people would not have come to you…So you don’t know how to, when to, and who to trust specifically because of this reason.”

Kartik Aaryan went on to say that whoever asked him to return home at his difficult time was incorrect. He stated that he is certain that everything he is doing is correct. “That’s my self-belief…That has really helped me to be what I am today. I never lost hope and persistence which have been my superpower,” he added.

In talking about his forthcoming film Bhool Bhulaiyaa 2, he mentioned that the horror-comedy also stars Kiara Advani and Tabu. Rajpal Yadav, Sanjay Mishra, Amar Upadhyay, Milind Gunaji, and Rajesh Kumar also play important parts in the film. The film is directed by Anees Bazmee and produced by T-Series and Cine 1 Studios Bhushan Kumar, Murad Khetani, Anjum Khetani, and Krishan Kumar. It’s a standalone sequel to Priyadarshan’s 2007 film Bhool Bhulaiyaa, starring Akshay Kumar, Shiney Ahuja, and Vidya Balan. On May 20, 2022, the film will be released in theatres.

Also Read: Kartik Aaryan and Kiara Advani stop for a bite to eat while promoting Bhool Bhulaiyaa 2 in Ahmedabad