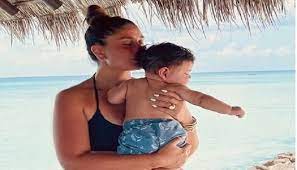 Kareena Kapoor Khan is making the most of her vacation in the Maldives with her family. On Wednesday, she teased followers on social media by posting a photo of herself on the beach in the Maldives. Kareena is seen relaxing by the water in a black monokini in a photo she uploaded with her son Jeh Ali Khan. Kareena looked to be enjoying the cold blue water caressing her feet as she rested on her family vacation, while Baby Jeh was spotted playing in the white sand.

Kareena Kapoor Khan wrote beside the photo, “Where I belong” accompanied with a heart emoji Over the weekend, the actress, her sister Karisma Kapoor, her daughters Samaira and Kiaan, and her sons Taimur and Jeh went out to the Maldives. Kareena had shared a photo of Taimur enjoying himself at the beach behind his brother Kiaan the day before. Since they travelled together for the Maldives last weekend, fans have been expecting to see more of Kareena and Karisma’s holiday images with their children.

Kareena had captioned Kiaan and Taimur’s photo, “Brothers,” and tagged Karisma in it. “Only love,” Karisma had written in response. On social media, the snapshot was quickly shared among fan groups.

Meanwhile, Kareena Kapoor Khan shocked fans by announcing her next project starring Jaideep Ahlawat and Vijay Varma on Wednesday morning. The actress will make her digital debut in Sujoy Ghosh’s film The Devotion Of Suspect X, which is based on a novel. It will be available to watch on Netflix. Aside from that, Kareena will star with Aamir Khan in Laal Singh Chaddha.