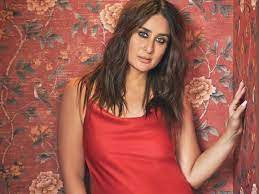 Kareena Kapoor Khan walked out in style to celebrate her mother Babita’s birthday at her father Randhir Kapoor’s residence on Wednesday, giving fans a visual treat. Kareena, who is known for her fashion sense, was spotted in a gorgeous red ensemble on her way to her father’s house. The stunning mother of two looked stunning in a short red dress and turned heads as she paused to pose for the cameras before entering the building.

Kareena paused and posed for the paparazzi as she exited her car. She is dressed in a short red dress and high heels. She accessorised with large sunglasses and a lovely sling purse. Kareena managed to serve up a great Summer date look with her hair in a bun, which will undoubtedly serve as inspiration to many of her female followers. Due to her fashion sense, the celebrity has been the buzz of the town since her cousin Ranbir Kapoor married Alia Bhatt.

Kareena Kapoor Khan was seen last night after dinner with her girlfriends Malaika Arora, Karisma Kapoor, and others. For the shoot, Kareena was accompanied by Taimur Ali Khan. After dinner, the mother-son combo was seen on their way home.

The internet has been flooded with Kareena’s images from Ranbir and Alia’s wedding. She also uploaded a sweet family snapshot of Saif Ali Khan, Jeh Ali Khan, and Taimur Ali Khan. At cousin Ranbir’s wedding to Alia, the celebrity appeared to be having a great time. On the job front, she is now collaborating with Jaideep Ahlawat and Vijay Varma on Sujoy Ghosh’s thriller. She will soon be featured in Aamir Khan’s Laal Singh Chaddha. On August 12, 2022, it will be launched.