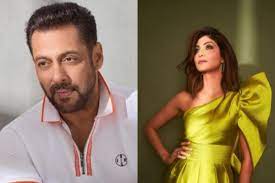 Salman Khan has also just revealed that perhaps the Da-Bangg tour would get out on December 10 in Riyadh, and he’s already received a lot of positive feedback on social media. Shilpa Shetty will indeed be performing on the Dabangg tour, according to print media. Salman and Shilpa Shetty have already performed together at award shows as well as live events. Garv, Auzaar, Phir Milenge, and Shaadi Karke Phas Gaya Yaar are among the movies in which they have collaborated.

Other celebrities set to join the cast include Jacqueline Fernandez, Saaie Manjrekar, and Sunil Grover. Guru Randhawa, a singer and actor, will also be performing throughout the Middle East as part of this tour. Katrina Kaif was also rumoured to have been a part of the Dabangg tour, however, due to her rumoured wedding dates, it still hasn’t been verified if she’ll still be a part of the performance.

From December 10 to 12, every one of the celebrities will perform across from live audiences in Riyadh. Other performances are also being confirmed, according to sources close to the squad, and they’ll be sealed in soon after.

Katrina’s wedding date with Vicky Kaushal, on the other hand, will determine if she may appear on the show. Vicky and Katrina’s wedding is set to take place between December 7 and December 9 at Six Senses Fort Barwara, a resort in Sawai Madhopur, Rajasthan, which is just 30 minutes from from Ranthambore National Park. Sabyasachi ensembles are expected for the bride and groom.

Salman Khan’s latest film, Antim – The Final Truth, was recently released in theatres, and this globe tour will be his second major endeavour by the end of 2021.

Who is Ben Stiller?