Bollywood Society » In her second look, Aishwarya Rai Bachchan adds colour and grace to the red carpet at Cannes 2022
Bollywood 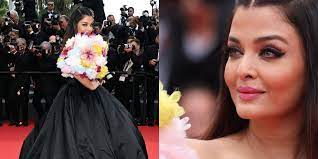 On the second day of Cannes 2022, Aishwarya Rai Bachchan wears another glossy ensemble. Among the most important events, the Cannes Film Festival, began. This year’s film festival is dedicated to Indian cinema. It’s worth noting that India has been designated as the official ‘Country of Honour’ during the Marche’ Du Film. Anurag Thakur, India’s Minister of Information and Broadcasting, is leading a team that includes AR Rahman, Pooja Hegde, and Shekhar Kapur, among others.

Aishwarya Rai Bachchan makes a spectacular entrance at the present Cannes Film Festival on the second day of the famous film festival. The stunning diva offered up another dazzling appearance after choosing a pink pantsuit. Aishwarya Rai Bachchan chose a stunning black gown with embroidered floral sleeves for her second look. She is accessorised with stunning earrings and kohled eyelids. The beauty queen waved to adoring supporters as she walked down the red carpet.

There are a lot of other Indian celebrities attending the event this year, in addition to Aishwarya Rai. Deepika Padukone and other jury members walked the red carpet on the first day of the 75th Cannes Film Festival. Urvashi Rautela and Tamannaah Bhatia were also seen on the Cannes red carpet looking their best. Nawazuddin Siddiqui, R Madhavan, Pooja Hegde, Tamannaah, Urvashi Rautela, and composer AR Rahman are among the celebrities attending the renowned event.

Six Indian movies are being presented at the festival. The Nambi Effect, Godavari, Alpha Beta Gamma, Boomba Ride, Dhuin, and Niraye Thathakalulla Maram are among them.

Also Read: On their anniversary, Abhishek Bachchan shares a throwback shot with Aishwarya Rai from his wedding