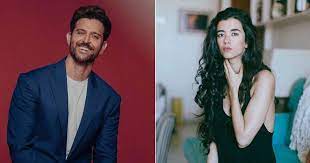 Since they were first sighted together in January, Hrithik Roshan and his rumoured girlfriend Saba Azad have been making headlines. Despite the fact that the celebrities have yet to officially on their relationship, their regular social media contacts simply add fuel to the fire of rumours that they are dating. Saba has also met Hrithik’s family, including his children. Furthermore, the War actor’s family has donated food to Saba on several occasions. Speaking of which, she just posted a photo of the Halwa sent to her by none other than Hrithik’s niece, Suranika, on her Instagram stories.

Saba published a photo of a dish filled with ‘halwa’ on her Instagram stories a while back (pudding). According to Saba’s caption, Hrithik’s sister Sunaina Roshan’s daughter Suranika sent her this halwa. The caption on Saba’s photo stated,

Hrithik’s family had spoiled Saba with food a few weeks ago while she was sick. Saba commented, “Sharing a snapshot of numerous wonderful dishes like pizza and spaghetti, “Thankee @kanchan roshan @suranika @pashminaroshan,” she added, with folded hands emoticons.

According to an India Today article, a mutual acquaintance of both stars informed the news site that they are very much into one other and that Hrithik’s family enjoys Saba’s musical work.

On the professional front, Hrithik is working on Vikram Vedha and Fighter. Saba, on the other hand, had a starring role in the highly acclaimed online series Rocket Boys.

Also Read: Saba Azad puts Hrithik Roshan in awe of her beauty with a pic

Evelyn Sharma shares a pic with her daughter Ava while breastfeeding

As they get photographed on set, Tara Sutaria wears an exquisite co-ord outfit, while Arjun Kapoor keeps it casual