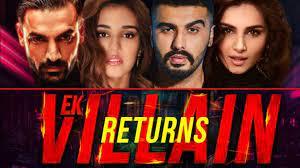 Remember the film Ek Villain, starring Shraddha Kapoor, Sidharth Malhotra, and Riteish Deshmukh? The action thriller was a smashing blockbuster, and the soundtrack had a huge influence on the audience. Fans have been anticipating the release of Ek Villain Returns since filmmaker Mohit Suri announced the sequel. However, it appears that the sequel to the action thriller may have to wait a bit longer. Ek Villain Returns has been delayed, according to a recent update.

The film directed by Mohit Suri, which was set to be released on July 8 this year, has been rescheduled. Ek Villain Returns has been pushed back until July 29. Mohit made the announcement by sharing an intriguing post on social media. Mohit posted a photo of a mask hanging on a wall on his Instagram account. He wrote in the caption, “#EkVillainReturns gets a new release date, 29th July 2022”.The reason for the postponing of Ek Villain Returns is unknown at this time.

For the uninitiated, Ek Villain Returns will star Tara Sutaria, John Abraham, Arjun Kapoor, and Disha Patani in the key roles. Arjun has expressed his excitement at the prospect of sharing the screen with Tara, John, and Disha for the first time. Disha, on the other hand, will collaborate with Mohit Suri for the second time in Ek Villain Returns, having concluded filming earlier this year. The actress and director previously worked together on the 2020 film Malang.

Also Read: Arjun Kapoor gives us a sneak peek at his 15-month fitness transformation: It’s been a difficult year