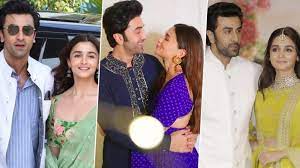 For years, Ranbir Kapoor and Alia Bhatt have been one of the most talked-about couples in Bollywood. The duo has made headlines not only for their debut collaboration, Brahmastra, but also for their on-screen chemistry. Alia and Ranbir have been spotted together in the city and on holidays, and the Humpty Sharma Ki Dulhania actress even publishes love-filled pictures of her main man on social media, which are a delight for fans. Speculations regarding Ranbir and Alia’s wedding have been widespread for a long time since they are frequently spotted giving out couple goals.

The wait is finally coming to an end, as Ranbir Kapoor and Alia are slated to tie the knot next week. Their wedding has become one of the most talked-about events in Hollywood these days, with fans eager to learn every detail of Ranbir Kapoor and Alia’s wedding celebrations. To be sure, there have been many rumours about when the power couple would marry, their wedding venue, guest lists, and ceremonies, among other things. So, here’s all you need to know about Ranbir Kapoor’s wedding to Alia Bhatt:

Date of the wedding reception

The location of the wedding

Ranbir and Alia will tie the wedding at RK House, Kapoor’s family residence. It’s worth noting that Rishi Kapoor and Neetu Kapoor married at the RK House in 1980.

The pair will tie the knot between the hours of 2 and 4 a.m. on April 16th. The obsession with the number 8 by Rishi Kapoor, Neetu Kapoor, and Ranbir Kapoor is the reason for this date.

Guests at the wedding

Guests at the reception

According to sources in the media, Ranbir and Alia will give a lavish celebration before the end of April, which will be attended by celebrities such as Ranveer Singh, Deepika Padukone, Karan Johar, Sanjay Leela Bhansali, Aditya Chopra, Arjun Kapoor, Shah Rukh Khan, and others.

Also Read: Vivek Oberoi wants Ranbir Kapoor and Alia Bhatt to play the leads in the adaptation of ‘Saathiya’