Bollywood Society » At the Mehendi ceremony, Alia Bhatt is surrounded by bridesmaids and receives a kiss from Ranbir Kapoor
Bollywood

At the Mehendi ceremony, Alia Bhatt is surrounded by bridesmaids and receives a kiss from Ranbir Kapoor 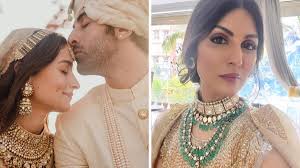 Alia Bhatt’s bridesmaids made sure she wasn’t left alone at the Mehendi with her passionate fiancé Ranbir Kapoor. Ranbir Kapoor kissed his bride Alia Bhatt in a lovely shot while surrounded by all of Alia’s dearest friends. The photo went viral after Alia’s best friend published it on social media. Not only that, but Riddhima Kapoor Sahni, Ranbir’s sister, also shared a sweet snapshot of Shaheen Bhatt showering love on Samara Sahni.

In a sweet photo, Ranbir gives Alia a special peck on the cheek while she smiles and poses with her girl squad. Another shot shows Alia’s full circle of friends sitting with her and posing for a picture-perfect moment. Shaheen was also in the picture. All of the bridesmaids posted the photo on social media. Riddhima, on the other hand, posted a photo of Shaheen cuddling her daughter Samara and referred to them as “dolls.”

Meanwhile, Alia tweeted images from her Mehendi ceremony with Ranbir Kapoor, describing it as “full of love, light, and happiness.” Ranbir was also spotted smothering her in affection. At the Mehendi event, he even surprised her with a dancing performance.

According to reports, Ranbir and Alia are planning a get-together for industry pals tonight, which would include their close friends and family members. Fans can’t wait to see the newlyweds again when they go out tonight because their Mehendi and Wedding images have gone popular on social media.