At her friend’s 25th birthday event, Shanaya Kapoor flaunts her toned physique in a sultry bikini 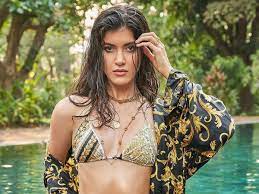 Shanaya Kapoor, who has become a young fashion hero, shared some spicy photos from a poolside party. The young diva went to a friend’s 25th birthday party and posted a picture dump on her Instagram account. Shanaya’s excursion was a total blast, from group photos to time in the pool. Shanaya wrote “Say” in the description and added cheese and a red heart emojis.

The skilled diva can be seen in the photos showcasing her toned form in a beautiful bikini. She snatched all of the eyes in the group photo she posted. She was dressed in a pink bikini. Shanaya also posed with her pal and showed off some poolside views. And the album’s final glance, a sun-kissed photo of Shanaya, has captured our hearts. The star kid’s tweet drew the attention of her admirers and Bollywood superstars, who flooded the comment area with praise. The first person to place a set of red hearts beneath the photo was Maheep Kapoor. Fire, hearts, and heart-eye emojis have also filled the comment section.

On the job front, Shanaya Kapoor is making news since she is set to debut in Bollywood with Bedhadak. Lakshya and Gurfateh Pirzada also appear in the film. Shashank Khaitan is directing the film, which is produced by Dharma Productions. On Instagram a few days ago, Karan Johar revealed the first posters of Lakshya, Shanaya, and Gurfateh Pirzada from Bedhadak.

Also Read: Janhvi Kapoor, dressed in a deep neck gown, cheers on her sister Shanaya Kapoor as she walks the ramp

As an artist, I’ve always trusted my intuition when it came to picking projects: Bhumi Pednekar