Bollywood Society » As she is photographed in an oversized top and boot cut jeans, Kareena Kapoor Khan’s attitude is unmistakable
Bollywood 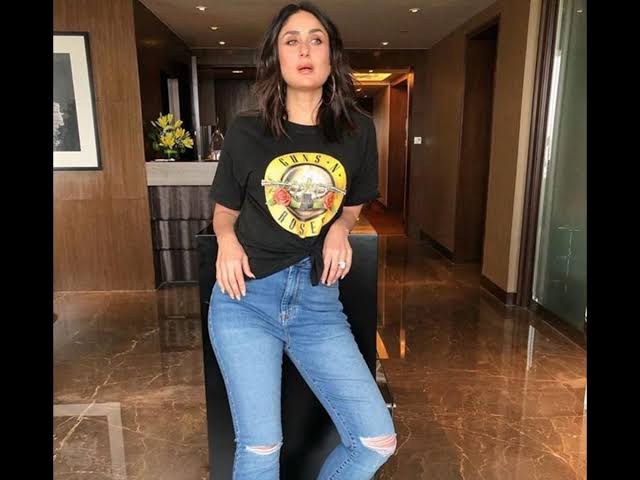 There is no disputing that Kareena Kapoor Khan is a diva. On social media, her fans adore seeing her photos and videos. When the paparazzi spot Bebo in the city, it’s usually a fantastic day. Everything she does, whether it’s her fashion sense or her swag, draws attention. The Heroine actress was spotted in casual wear outside her building in Bandra today, and we have to agree that her swag and style will keep your gaze glued to her.

Both Kareena and Taimur appeared to be stylish and well-dressed in the photos. Kareena wore bootcut jeans and a charcoal black shirt. Her hair was pulled back into a nice bun. She completed the look with a chic LV bag. She was seen holding the hand of Tim, the baby. When it came to Taimur, the young man was dressed dapperly in a light pastel blue shirt and white slacks. He wore blue sneakers as well.

Meanwhile, Kareena Kapoor is set to act alongside Aamir Khan in the film Laal Singh Chaddha. This is an authentic Hindi version of Tom Hanks’ Hollywood hit Forrest Gump. In Laal Singh Chaddha, Naga Chaitanya plays an important role. This will be Kareena and Aamir’s third film together, following 3 Idiots and Talaash. This will be her first film since Jeh’s birth, so keep that in mind. It will be released in theatres on August 11, 2022.

She’s also working on Sujoy Ghosh’s film with Jaideep Ahlawat and Vijay Varma. This film will be her digital premiere on Netflix.

Swara Bhasker, who is celebrating the 6th anniversary of ‘Nil Battey Sannata,’ believes the film made her a better person’