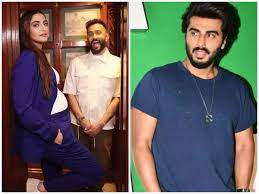 Actress Sonam Kapoor and her husband Anand Ahuja are overjoyed after getting well wishes and blessings from their fans and family members. Are you curious as to why? Well, one of Bollywood’s most adored couples is about to have parents. Sonam and Anand broke the wonderful news to their followers on their social media accounts just a few days ago. The couple made their first public appearance since learning of the pregnancy on Wednesday. The Kapoor family, including Anil, Arjun, Anshula, and others, were also seen at the launch ceremony in the city, in addition to Sonam and Anand. Arjun Kapoor was photographed as soon as he arrived at the event by photographers.

As Sonam and Anand announced their pregnancy, the ‘Ki & Ka’ actor couldn’t stop smiling as the media congratulated him and nicknamed him’mama.’ Arjun had already published the photos of the soon-to-be parents on his social media account, writing, “Nice things happen to good people.” “It’s time to be a Mamu…” It’s no surprise that Arjun Kapoor is ecstatic about the impending birth.

Sonam and Anand uploaded a message on social media announcing the news, writing, “Four hands. To provide you with the finest possible care. There are two hearts. Every step of the way, that will beat in time with yours. There is only one family. Who is going to love and support you? We’re looking forward to seeing you.”

Arjun Kapoor will next be featured opposite Tara Sutaria, John Abraham, and Disha Patani in Mohit Suri’s Ek Villain Returns. He’s also working on Kuttey and The Ladykiller.