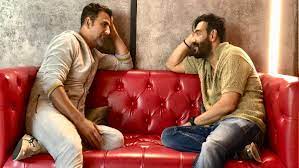 Akshay Kumar is one of the most talented performers in Bollywood. The actor from Bhool Bhulaiyaa recently celebrated three decades in the industry. He made his acting debut in the romantic action movie Saugandh, released in 1991. In 30 years, the actor has appeared in around 145 films. On the occasion of Akshay Kumar’s 30th anniversary in the Bollywood business, his close friend and fellow actor Ajay Devgn scribbled a special message on his social media, wishing the actor continued success.

The Gangubai Kathiawadi actor captioned a photo of himself with Akshay Kumar, writing: “Congratulations Akki. 30 years in cinema and several more decades to come. Hope you set new records. Will always be there rooting & cheering for you. @akshaykumar.”

Prithviraj’s creators shared a banner for Akshay’s special day. It includes posters from every movie in which Akshay has appeared. The Bachchhan Paandey actor shared the video on Twitter with the caption, “30 years of cinema, a lifetime filled with your love! Thank you for this amazing journey and thank you @yrf for piecing it together so beautifully with #Prithviraj, releasing in cinemas on 3rd June.”

However, Akshay has a number of intriguing projects in the works. He next appears in Prithiviraj, Raksha Bandhan, Ram Setu, OMG 2 – Oh My God 2, Selfiee, and the remake of Untitled Soorarai Pottru. In contrast, Ajay will appear in Maidaan, Drishyam 2, Thank God, and Bholaa.

Also Read: In the wake of Akshay Kumar’s apologies, Ajay Devgn weighs in on promoting the elaichi brand

In his action persona, Ayushmann Khurrana will be here to make ‘India win’ despite all divisions