Bollywood Society » Abhishek Bachchan discloses Aaradhya’s response to Dasvi’s trailer, stating that he is “nervous” to present Dasvi to his family
Bollywood

Abhishek Bachchan discloses Aaradhya’s response to Dasvi’s trailer, stating that he is “nervous” to present Dasvi to his family 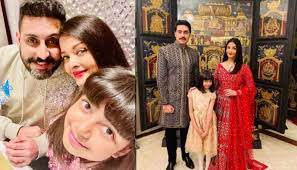 Fans have been raving over Abhishek Bachchan’s new appearance since the first look of his film Dasvi was revealed. After that, when the trailer was published, the anticipation for the film was palpable. We’re sure the actor received a lot of positive feedback for his trailer. However, the emotions of your loved ones are something that you will always remember. In a recent interview with Desi Martini Abhishek Bachchan discusses his family’s response to the trailer for Dasvi, as well as his daughter Aaradhya Bachchan’s reaction to the film.

Abhishek Bachchan revealed his family’s response upon seeing the Dasvi trailer, saying, “They have been very supportive and very forthcoming and sweet. That makes me very very happy and to do all that I do for my family and their reactions and emotions mean the world to me. So now I am nervous because they have to feel the same thing after they watch the film so fingers crossed.” He also disclosed his daughter Aaradhya’s reaction, stating that she loved it a lot.

However, Tushar Jalota directed Dasvi, a Maddock Films production presented by Jio Studios & Dinesh Vijan and produced by Dinesh Vijan and Bake My Cake Films. Yami Gautam and Nimrat Kaur play crucial parts in the film. From April 7, the movie will be available to view on Jio Cinema and Netflix.