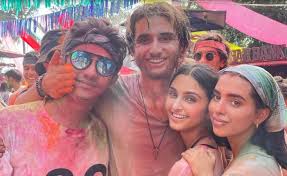 Holi, the festival of colours, is being celebrated today, and social media is flooded with photos from the event. It’s a lot of fun to enjoy the holiday with friends and family. When it comes to appreciating and celebrating the event, our celebrity children are no exception. Aaliyah Kashyap, director Anurag Kashyap’s daughter, posted photos of her Holi celebration on social media. She has a sizable fan base, and she occasionally shares peeks of her personal life with them.

Aaliyah was joined by her boyfriend Shane Gregoire, Boney Kapoor, and late actress Sridevi’s younger daughter Khushi Kapoor for the celebration. The trio was all smiling in the photos, with Holi colours all over them. She posted her primary man’s happy snapshot in the second photo. Anurag Kashyap’s adorable daughter Aaliyah was seen cuddling Alaviaa Jaaferi in the third shot. She posed with her companions in the other two photos. The images were a lot of fun to take. Sweet responses filled the comment area as soon as she shared the photos. “Happy Holi,” a fan wrote. “Wow, everybody looking wonderful,” remarked another person.

Anurag Kashyap shared a photo of Aaliyah and her boyfriend Shane on his official Instagram account a few days ago. Aaliyah and Shane looked adorable together in the shot. “It’s a bye bye supper.. @shanegregoire departs in the morning for a month.. and @aaliyahkashyap is going to be heartbroken…” commented Anurag Kashyap beside the image. A large number of netizens and fans appreciated the shot.

Khushi Kapoor, on the other hand, will make her acting debut in a Zoya Akhtar film based on the international comic book series Archie. Suhana Khan and Agastya Nanda will appear with her.