Disha Patani joins the Instagram trend, and she looks cute in a ‘back-to-school’ outfit 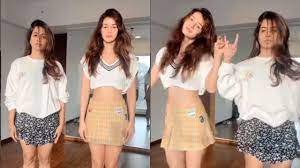 Disha Patani is without a doubt one of the most beautiful actors in the profession. There’s a reason she’s renowned as India’s national crush. Disha Patani made her Bollywood debut with MS Dhoni: The Untold Story in 2016, and the rest is history. The actress has a sizable social media following, thanks to her amazing beauty and flawless dance talents. She never fails to amuse her followers on Instagram, where she is very active. You can always find her on social media sharing her beautiful or hilarious photos.

She shared a clip on Saturday in which she hopped on a popular trend and, let us tell you, she rocked it!

Disha Patani may be seen breaking a leg with legendary celebrity dance teacher Dimple Kotecha in the trailer. To the catchy reel melody, the two grooved and danced. Disha’s incredibly stylish dress also caught our eye. She wore a check skirt, long stockings, and sliders with a white sweater crop top. Her ensemble had a ‘back-to-school’ sense about it, and honestly? We really like it! Disha kept the caption on the reel short but to the point. She stated, “Chillin….” As predicted, the video became viral in seconds. Many admirers showed their admiration for their favourite actress. Many people followed Disha’s lead and joined the trend.

Disha Patani has two projects in the works this year: Ek Villain Returns and Yodha, according to reports. Ek Villain Returns is directed by Mohit Suri and stars John Abraham, Arjun Kapoor, and Tara Sutaria in the key roles. Meanwhile, Disha will star with Sidharth Malhotra and Raashii Khanna in Karan Johar’s Yodha.

Also Read: Disha Patani is the ideal dog mom, strolling about with her pet in a stroller.

Pankaj Tripathi claims he never seen ‘any money’ as a child: I strive to be content with what I have