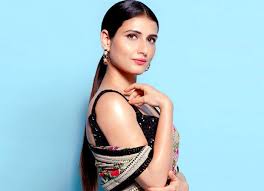 Fatima Sana Shaikh had pulled out from the Hindi version of Tamil movie ‘Aruvi,’ months following saying that she has been happy and delighted to become a part of the movie. The Dangal actress had reportedly opted out from the project with filmmaker E Niwas, according to an ETimes article. What is the explanation behind this? Due to just a project delay, Fatima’s dates with some other projects collided.

The movie was planned to start shooting in August 2021, and Fatima Sana Shaikh had set dates for that month. The project, however, did not go into production and was postponed for November. According to reports, the actress was unable to work out the dates due to other commitments.

According to the article, Fatima Sana Shaikh informed the movie’s producers, Applause Entertainment and Faith Films, and said she would work with them again on a future project.

Fatima Sana Shaikh has already revealed that she would be headlining Aruvi, saying, “I am so thrilled to do the remake of ‘Aruvi’ and really looking forward to diving deep into the skin of the character. I am really glad that Applause Entertainment and Faith Films have come together with E Niwas to make this great content and I am really excited to embark on this journey.”

However, in September, we exclusively disclosed that perhaps the actress had been invited to take a role in Vicky Kaushal’s next film Sam Bahadur. “Fatima was invited to play a key role in Sam Bahadur, and she was quite enthusiastic about the position. The producers and the actress are now in preliminary discussions, and the meeting should be formalised soon. However, pre-production work on the picture is underway, with a release date set for early next year, according to a person close to the situation.

Also Read: The release date of Thank God starring Ajay Devgn and others is out

Rajkummar Rao and Patralekhaa’s pyjama party night with their families

The Wolverine: All you need to know about...

All that you must know about the DC...

All that you must know about the movies...

The Wretched: All you need to know about...