Bollywood Society » Ananya Panday describes Vijay Deverakonda, her Liger co-star, as “gentle.” They had a lot of ‘fun’ while shooting, according to them
Bollywood

Ananya Panday describes Vijay Deverakonda, her Liger co-star, as “gentle.” They had a lot of ‘fun’ while shooting, according to them 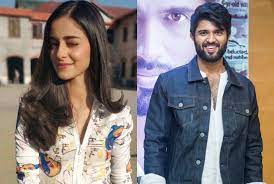 Ananya Panday is now preparing for the release of Liger, a sports drama in which she co-stars with Vijay Deverakonda. Puri Jagannadh directed the picture, which was produced by Karan Johar, Puri Jagannadh, and Charmme Kaur. Aside from the well-known actors, Ronit Roy and Ramya Krishna play important parts in the film. Mike Tyson, the American boxer, makes his acting debut in Hindi film with a lengthy cameo. Panday will be making his Telugu film debut with Liger, while Deverakonda will be making her Bollywood debut.

In a recent interview with India Today, the actress from Student Of The Year 2 discussed her experience working with Vijay in Liger. He is ‘wonderful,’ according to Ananya, and he is’so sweet.’ She also stated:  “We had a lot of fun when we were shooting in the USA together. We have wrapped the film, and I just wrapped up dubbing for the film. So now it’s almost fully ready. The film is going to come in August and it is a full-on masala film. I think it will make people really happy watching it.”

Liger is a pan-India film that is being released concurrently in Telugu and Hindi, as well as dubbed versions in Tamil, Malayalam, and Kannada. The film will be released in theatres on August 25, 2022.

Ananya also sent a beautiful message for Deverakonda on his 33rd birthday. The Pati Patni Aur Woh actress captioned a photo of herself and Vijay from their film’s Los Angeles schedule: “Happiest Birthday @TheDeverakonda Let’s kill it this year! All my love always.”

According to reports, Vijay and Ananya will appear in season seven of Koffee with Karan. “Vijay Deverakonda has made it to the guestlist for Koffee with Karan 7,” according to the report. He’ll very certainly be seen with Ananya Panday, his Liger co-star. Given that the conversation show will premiere around the same time as Liger, this will be a great pairing. However, Rashmika Mandana was discussed as a possible replacement for Ananya on the show.” As of currently, there has been no confirmation.

Disha Patani is the ideal dog mom, strolling about with her pet in a stroller.

Suhana Khan, Agastya Nanda, and Khushi Kapoor amaze Amitabh Bachchan in the trailer for The Archies’